There is always a rainbow to cheer you up after some rain.....

Yesterday we had some rain for a couple of hours, I enjoyed it because it really cooled the air, but I knew our customers would be wishing it to end.

Suddenly it stopped and almost as suddenly all our customers came out and seemed to be taking photos of the clouds! More and more were coming out and taking photos, so I had to go and take a look and see what all the fuss was about. 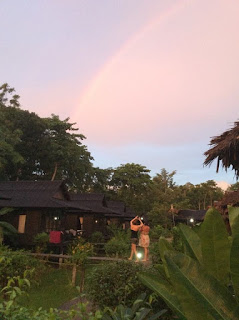 A beautiful rainbow had appeared and unfortunately my photo does not do it justice, but it was almost a complete half circle stretching from the beach to the mountain. 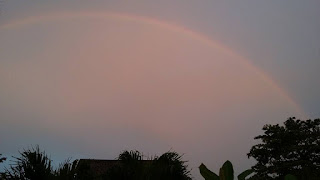 It obviously captured a lot of imagination on the island, as several other people nearby started posting photos of it too on Facebook.